Skip to content
Economy Minister Kurt Borneo met with investors and analysts in the United States.

At the meeting, Borneo presented the objectives of the current Peruvian economic policy, the actions needed to achieve inclusive economic growth, and the results for this year and next. Likewise, he presented the investment opportunities offered by Peru in the short and medium term, and answered key questions about the Peruvian economy.

During the day, the owner was Ministry of Economy and Finance (MEF) He also met with officials from major fund managers such as Lord Abbet, MEAG New York, PGIM, Pharo Management, Schroeder IM, Lazard Asset Management, Nuveen Investments, Pictet Asset Management, Stone Harbor Investment, Van Eck Associates, PIMCO, Bank of JP Morgan Chase Investment , who operates from New York, and explained to her the situation and views in the country.

It should be remembered that on Monday, Minister Borneo gave a presentation to members Association of the Americas / Council of the Americas (AS / COA). chair the meeting The president and CEO of this organization, Susan SegalHe answered the questions of the members of this international entity, which brings together the most important American and international groups and companies with interests and investments in Latin America. 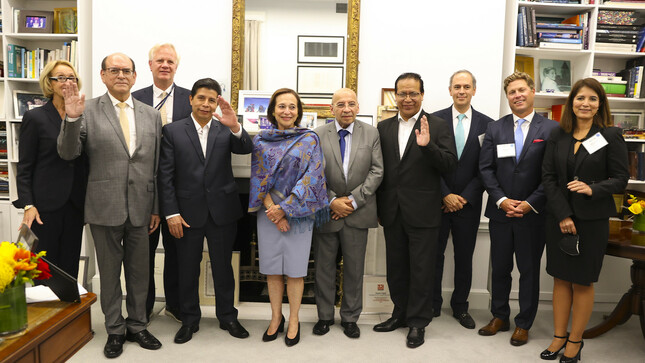 Borneo also attended a meeting with US Under Secretary of State for Economic Growth, Energy, and the Environment, Jose W. Fernandezwho discussed with him Americas Alliance for Economic ProsperityPresident Joseph Biden’s initiative.

This space will constitute a space for dialogue and cooperation for Peru in areas such as investment, innovation, climate change, trade and technology. In its initial phase, it will be promoted through the formation of a working group that will bring together different countries in the region.

The Alliance aims to direct its efforts towards economic growth in Latin America, along with promoting critical reforms, towards reducing inequality and eradicating poverty.

Finally, beside Your Excellency President Pedro Castillo and Minister of Education, Minister Borneo met him United Nations Secretary-General António Guterresto address challenges in education and to explore the possibility of technical assistance in curricular structures.

The Minister of Economy and Finance They reiterated that Peru will be among the fastest growing countries in the region in the next four years with an average annual expansion of 3.5%.

“The positive thing about Peru is its macroeconomic resilience, which is very impressive. So much so that, for example, in the next four years the country will have one of the highest growth rates in the region, with an annual expansion of 3.5%,” stressed Borneo.

Regarding the meeting with businessmen in New York, Borneo said that it is mainly in the interest of investors to ask about some aspects that could raise controversy, through information that comes from the state itself.

Kurt Borneo: “There is no position from the government against private activity”
Foreign businessmen highlight Peru’s economic strength in New York
Kurt Borneo: ‘No support for pointing out a potential financial crisis in the country’

Gutierrez began his tour of Brazil and the United States today

Is forex trading legal in Uganda?