Where were you when Star Trek actor William Shatner became the oldest person to travel to space last year? Even if you don’t remember that moment, you wouldn’t be able to deny that 2021 was an important year for space tourism thanks to a series of multimillionaire-backed launches that put many civilians into orbit. Therefore, hopes for 2022 are very high.

“Space is no longer the domain of governments only,” Steve Koenig, vice president of research at the Consumer Technology Association (CTA), told DW. In fact, 2022 promises to be the first year that more people who pay for their transit themselves than public officials, read astronauts from space agencies, and travel to space. The three largest private space companies – Virgin Galactic, Blue Origin and SpaceX – hope to send more space tourists this year. SpaceX even signed an agreement to send it to the International Space Station (ISS).

However, bizarre experiences like a day trip to experience zero gravity or even a vacation in orbit are still far-fetched dreams for the vast majority of earthlings.

Among the space technology exhibitors at CES 2022 is Sierra Space, a Colorado company that hopes to build a space station this decade in collaboration with Blue Origin. This will replace EEI as a business destination. And there’s more on the horizon: geostationary satellites that provide global internet coverage or the fabrication of elements in zero gravity are two examples.

Another notable technology trend is health monitoring via smart watches and physical activity trackers. “Wearable technology allows you to communicate smarter and provide your doctor with real-time information on signs such as body temperature,” Koenig explains.

According to a study by Deloitte, 14 percent of adults in the United States owned a smartwatch in 2018, a number that has certainly risen dramatically due to the pandemic. For its part, technology research company Gartner expects smartwatch sales to reach $31 billion by 2022, compared to about $19 billion in 2018.

Telemedicine will increasingly be supported by real-time data on people’s health and fitness.

By recording sensors and transmitting relevant information continuously over the course of a week rather than, say, twice a day, doctors and psychiatrists could be provided with better standards to more accurately interpret the physical and mental health of their patients. A different approach is wearables like MedWand, which allow patients to measure their heart rate, oxygen level and more, allowing doctors to check them while they live from a distance.

However, there are concerns about accessibility and data security. After all, medical data collection can be big business. However, Koenig shares the belief of most experts that wearable technology and telemedicine can be complemented by face-to-face care.

When was the last time you were in the gym? Virtual reality workouts, Peloton bikes, and fitness mirrors are becoming more and more popular during the pandemic. They all belong to the category of consumer technology called “connected fitness”.

According to Koenig, the term refers to a subscription that is part of a larger package. “The real benefit is working with other people from home, so you can see how they’re performing compared to others,” he explains.

This year comes an improved VR model, the Oculus Quest 2, and progress is being made in developing new fitness features. And Supernatural, a highly rated training app that’s only available in North America at the moment, could launch in Europe as well.

Metaverse: Connecting the Physical to the Digital

The current idea of ​​the metaverse combines social media, online gaming, augmented reality, and entertainment to create immersive experiences, such as dancing with other people in an online concert. But according to Koenig, avatars interacting with each other in a three-dimensional universe are just the tip of the iceberg. “Many of the core components of this digital world and other uses, such as virtual meetings, are already among us,” says the expert.

Examples include 5G, which will provide the necessary strong connectivity, cloud computing, haptic clothing (virtual reality suits), games like Roblox and Fortnite, as well as many devices such as cameras and sensors. An emerging imaging technology known as volumetric video, which combines the art of cinema with the interaction of video games, is also likely to be included. 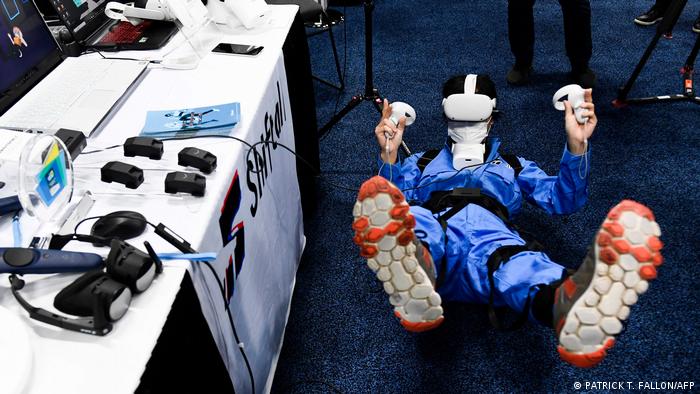 Las Vegas CES user tests some tools of the future.

The question is, according to Koenig, how companies will pool “these blocks that exist into a business model and business opportunity.” While he believes it is too early to define what this “meta-economics” will look like, he expects technologies such as blockchains, non-fungible tokens (NFTs), cryptocurrencies, and DEFI crypto (DeFi) to play an important role in metaverse.

Koenig believes the metaverse can mitigate some of the problems that have plagued the internet, such as hate speech or virtual harassment, as long as we “apply the lessons and best practices we’ve learned online, from cybersecurity to online tagging.” For him, “Just as the Internet in the past twenty-five years has shaped our daily lives, meta-experiences will likely define the twenty-first century lifestyle.”

After it became a virtual show last year, the 2022 edition of CES will be a hybrid. Between January 5-7, more than 2,200 exhibitors from 160 countries will showcase the latest devices and innovations in consumer technology in Las Vegas.