Following a successful outing at the Fortinet Championship earlier this year, Max Homa collected his second PGA Tour Championship of the season when fending off the field in an extremely impressive final round at TPC Potomac this past weekend.

But how did the 31-year-old from Scottsdale, Arizona, manage to defy the odds and outperform the likes of Rory McIlroy and Matt Fitzpatrick?

The return of Rory McIlroy to the PGA competition for the first time since his final-round 64 and runner-up placement at the Masters was highly anticipated. Fans of the sport owned high expectations for McIlroy, and so did the bookmakers.

Sports betting in Maryland was a crucial part of the weekend’s PGA antics as the TPC Potomac at Avenel Farm in ML – despite the state not yet reaching complete legalization for online wagering – the PGA event became the host to a wideset spread of betting odds. While bettors of Maryland were still required to attend casinos or physical sportsbooks to place their wagers, an 18-month hiatus since Marylanders legalized online sports betting could still be six months away from its launch. This factor didn’t prevent the large number of wagers coming in on the return of McIlroy.

McIlroy at +800 was a clear favorite, and even Corey Conners, who came in second best at the sportsbooks, was still a significant price away from the Irishman at a +1800 price tag.

Elsewhere on the betting board, bettors were able to snatch Matt Fitzpatrick and Tony Finau at +2200, Abraham Ancer – who notably tied in fourth during the 2018 Wells Fargo -, Gary Woodland, and Russel Henley at +2500. Seamus Power and Tyrrell Hatton came in at +3000 odds, but I suppose you wonder when Max Homa will appear on this list.

Handicappers fortunate enough to take a shot on Max Homa pre-tournament would have collected +4000 odds, as the oddsmakers gave him a 2.4% chance of victory. $100 bettors support Homa walked away with a generous $4000 return but not without an incredible comeback in the final round.

Keegan Bradley led the overnight standings heading into Sunday’s final round at TPC Potomac, but with a two-stroke comeback, it was Homa who lifted the Wells Fargo silverware.

Bradley backers at +3300 could only watch in despair as Homa went two-under 68 to end his week on eight under and two clear of the field.

The struggles for Bradley during the final-round 72 saw him decline back to six under next to Cameron Young and Fitzpatrick, as the oddsmaker’s favorite McIlroy couldn’t retain his Wells Fargo title with two-under 68 and a fifth-place finish. 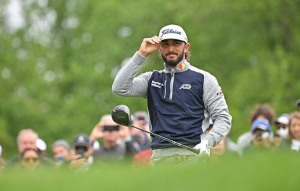 “Keegan is an excellent golfer; he hits it so well and holed some perfect putts,” Homa commented. “I was just trying to play my game and see what happened. He made an unbelievable birdie on 16 while I was trying not to make double, so I just knew he wasn’t really going to go away.”

Homa began the final round two strokes shy of top position but swiftly altered the standings by sliding an eight-foot birdie on the first to eventually put himself on top of the leaderboard when Bradley double-bogeyed the par-five second.

Bradley’s day only got worse with a bogey on the fourth, but a slight rebound and glimmer of hope came from a 15-foot birdie on the seventh as Homa dropped a shot. He managed to momentarily take the lead with a birdie on the eight, but Homa returned fire, and following a penalty on the eleventh, the Arizona kid took the lead by three.

“I didn’t play my best golf today,” Bradley commented. “It was choppy, and then I had a couple of good stretches, but I had a chance there at the end, so I’m proud of that aspect of it. But I’m pretty bummed; I felt pretty good about this one.

“I’m happy with where my game is at, especially my putting. Jeez, if I can putt like this, I feel like I can do a lot of damage the rest of the year.”

The intense shootout continued on the thirteenth when Homa dropped back to just one in front of Bradley. However, the resiliency of Homa saw him catapult three ahead with a 12-foot birdie fifteenth.

Going down to the wire, Bradley bounced back after a bogey on fifteen to edge back within one when Homa flopped on the next. However, a bogey on the last and a two-shot success with a two-putt par for Homa saw him clinch the back-and-forth battle.

“Life’s good,” said Homa. “I’ve got a good life, and I’m playing good golf. I’m coming into my own. I’m starting to believe in myself more.

“Keegan is really good. I knew he would never go away, and I just tried to keep hitting good shots. Obviously, I’ve seen some low spots on this tour and for the last three years now, finding my stride and racking up four wins is crazy.”

The Rest of the Field 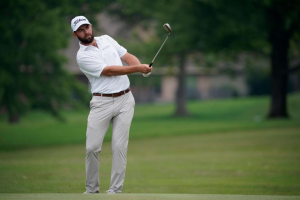 The oddsmaker’s second-favorite of the tournament, Fitzpatrick, landed a 40-foot highlight on the twelve and collected a shot on the final hole to a three-under 67, which became his lowest score of the week. During the last nine, Cameron Young managed a final-round 66 for a joint-second place following three birdies in a four-hole run.

The biggest disappointment stemmed from the defending Wells Fargo Champion, Rory McIlroy. He hit consecutive 68s during the weekend with four birdies and two bogeys on Sunday to finish in fifth. A T5 finish is nothing to be ashamed of, but the expectations undoubtedly exceeded him.

“Like the shot selection into 16 there trying to hit a hard wedge and not quite getting all of it, hitting the slope, spinning back to the front of the green,” McIlroy commented. “You hit a three-quarter 9-iron; that maybe doesn’t happen.”

Outside of his complaints, McIlroy believes a busy summer without poor weather conditions will provide a more joyful experience.

“Jeez, all year, it’s just been wind or rain or a combination of both,” McIlroy said. “Tulsa might be hot, but I’m looking forward to hopefully not having to get the umbrella out for a while.”

Undisclosed accounts in the US: “The signing of the agreement is imminent, with effect in 2023.”

COB protects its governing body against outside investors

WhatsApp Plus 2022 Free Download: Install the latest version of the app on Android | Link to download the APK without ads and in Spanish | RMMN EMCC | Peru By | Colombian Company | Mexico MX | United States of America | Play DEPOR

Tik Tok. A young woman is rejected by her boyfriend when he sees her without filters | video