Europe and the United States may expect new import delays and electronics shortages from China as a result of the strict COVID-19 lockdown in Shanghai, warns an economist at the Kiel Institute for World Economics (IfW-Kiel). Global trade expert Vincent Stammer told DW that exports from Shanghai, the world’s largest container port, have fallen by nearly a third.

Stamer tweeted a graph showing that volumes of outbound shipments from Shanghai fell sharply, while volumes from other Chinese ports were flat. Other port data shows that the average daily volume of 140,000 containers has been reduced to 100,000 per day.

Shanghai is ground zero for the largest wave of COVID-19 in China since the epidemic began more than two years ago. The port city, with a population of 26 million, has been under a strict lockdown since March 28, forcing some workers to sleep in its factories.

Factories in the area around Shanghai specialize in the export of consumer goods such as tablets and televisions, as well as more sophisticated and intermediate electronic goods used in manufacturing in the West.

A huge container ship driven by tugs towards the port of Shanghai.

“It seems that manufacturing has slowed down in the Shanghai area, and the goods have not reached the port to be loaded onto container ships,” Stammer said.

According to the expert, you will notice delays in Europe in about two months, as it takes container ships between 5 and 6 weeks to travel from Shanghai to the port of Hamburg in northern Germany, and another two weeks to unload and deliver the commodity. .

Stammer predicted that consumer goods will become more expensive this summer as a result, adding that Germany may be among the countries hardest hit by delays, as nearly a third of seaborne trade between China and Europe’s largest economy passes through the port of Shanghai. He said that between 5 percent and 8 percent of trade between the two countries is currently delayed.

The German economic representative in China, Maximilian Botch, backed the forecast, telling on Friday (04.22.2022) to the DPA news agency that alternative routes through other ports were not enough to mitigate the loss.

Boteach agreed that the Shanghai port itself was not the biggest concern, because the real delays were due to the transportation of goods from the factories to the port.

Additional delays will undoubtedly exacerbate the supply chain crisis that has grown since the peak of the first COVID-19 lockdowns around the world in the spring of 2020.

The pandemic initially shut down much of the global economy, forcing shipping companies to cancel shipping plans. This, in turn, has left dozens of container ships anchored off the coast of western and Chinese ports, often in the wrong place. 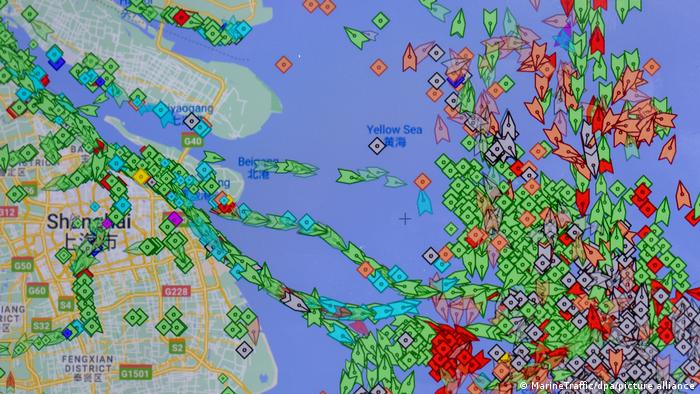 A graphic from the Marine Traffic app shows dozens of ships moored near the port of Shanghai.

As a result, more than three-quarters of the world’s ports have experienced unusually long wait times in the past two years, according to Bloomberg.

There is no quick fix

“My gut feeling is that the delays can get worse before they get better,” Stammer cautioned. He also predicted that global supply chains “will not return to normal this year” because bottlenecks at ports and shipping are difficult to resolve.

“In the next 12 months, we should see some improvement, but only if further lockdowns can be avoided in China,” Stammer added.

Chinese leaders have implemented a strict “non-spreading virus” strategy that includes curfews, mass testing and quarantine requirements since the virus emerged in Wuhan in late 2019.

This approach is being tested by the arrival of the Omicron BA.2 variant of the coronavirus, and because Chinese vaccines are not as effective as those produced in the United States and Europe.

Oxfam said there are 15 Mexicans among the richest