Russian Foreign Minister, Sergey LavrovThis Thursday warned that Moscow will respond to any unfriendly action by the United StatesWhen commenting on press information about what Washington is considering expelling Russian diplomats and imposing new sanctions on their country.

We will respond to any unfriendly steps. This falls under its weight. “Lavrov said at a joint press conference with his Kazakh counterpart, Mujtar Teloperi.

President of the United States, Joe BidenUpon reaching the White House, he commanded Investigating potential hostilities by Russia, such as cyberattacks, interference in US elections, poisoning Russian opposition leader Alexei Navalny, and payment of bounties for assassinating US military personnel in Afghanistan.

According to US media, the investigation is over and the White House is currently analyzing Expel Russian diplomats and impose sanctions on top Moscow officials.

I have read reports that the (US) administration has concluded the review of Russian hostilities. They did it very quickly, because they accuse us of committing a lot of sins and it cannot be done in two weeks, not even in two months. ”Diego Lavrov.

The Russian minister pointed out that Washington’s policy toward Russia is leading nowhere They are useless in terms of the goals declared when the first sanctions were imposed. 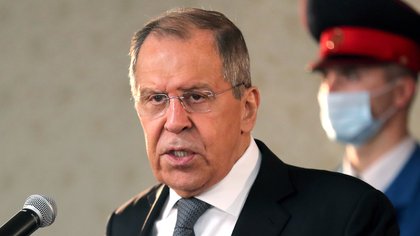 “This position has been repeated many times and these actions convince us of one thing only: We must rely on our forces, because neither the United States nor its allies are reliable partners, and in key areas of the state’s work we cannot rely on their morale or on whichever foot they rise.He stressed.

Russia has arrested a CNN reporter in Moscow and a group of doctors who demanded an interview with the opposition Alexei Navalny
On alert in the Arctic: Russia is increasing its military presence with infrastructure, nuclear submarines and tests of its latest weapons
The United States asked Russia for an explanation of the recent military “provocations” on the border with Ukraine