The evolution of video games and the great growth of their consumers in recent years has encouraged more and more research on the impact of video games on human health, especially children. We usually learn about the negative aspects of computer games from the media, and the biggest problems are violence and addiction to gaming. However, if we look at the trends in the industry, we come to the conclusion that violence in this media is less represented than in other forms of generally accepted entertainment. According to experts, the results of recent research indicate that playing video games has numerous advantages and positive effects on the growth and development of children. An increasing number of scientific papers dealing with the positive impact support this thesis extending it to learning processes and their roles in all classrooms.

Video games easily capture the attention of players and in that way, if they are of a proper type, they can make it easier for students of all games to master a certain area or get a certain knowledge. It is only important to apply this game in an adequate way, in order to avoid negative effects. The very nature of interactive media means that they provide an excellent model for studying. In particular, positive reinforcement to the educational process is definitely related to video games.

“The energization theory of motivation and emotion envisages investing effort and energy in order to master a certain level of knowledge. Then, it is asked to move to a higher, more difficult level, and where possible success guarantees a kind of reward”, according to Elijah Sanchez, a researcher at PapersOwl.com, who analyzed the impact of video games on the educational process.

Although people interpret books differently, this leads us further to fine examples of the application of this theory because they meet all the requirements. In addition, they can be a huge motivational tool. In general, the most important positive influences and advantages a video game can have are:

Finally, this method where games facilitate learning and make reading experiences unique is something we will see much more with technology and study concepts are more accepted around the world.

The traditional learning experience is considered boring by many pupils. Moreover, almost half of the repeaters from American high schools stated the reason for repeating the class, that it is not interesting enough for them. Moreover, about 70% of state university students are not inspired enough to work hard.

Both action and educational video games are stepping up at this point because they provide attention longer than other forms of learning.

The reader response theory recognizes them as constantly presenting the player/student with new tasks that must be mastered and thus facilitate learning more than classical teachers could do. From the reader response theory perspective, it is possible for a video game teach child and engage students to play games and get new skills needed for their sustainable future.

Although student engagement is only one component of effective learning, it is important to emphasize that a positive attitude alone does not guarantee success, but a negative one totally eliminates it. Modern learners want tasks that are fast, involve creativity, and provide more freedom to make decisions, with information inserted in between. Also, they will be more interested if there is a narrative that connects the given tasks into a meaningful whole. When the game has the full attention of the student, he/she will lose the notion of time and will ignore distracting elements. Their interest in a particular task proved to be more influential than their ability level. 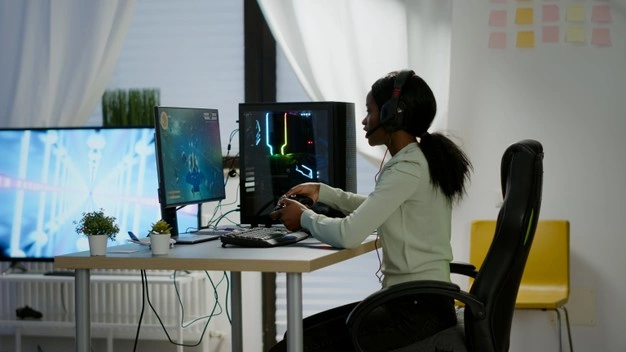 As research consistently shows that new releases are becoming more violent and violent, and because it is believed that they can harm both the physical and mental development of the child, the researchers focused their work primarily on such games.

One of the effects determined through research is that exposure to violent titles is closely related to aggressive thoughts, philological arousals, aggressive and antisocial behavior. However, the question is what is the relationship between playing action video games and their influence on intelligence? Do they improve a person’s memory and reasoning abilities, or affect them in a negative manner? Since studies interpret video games differently, these issues will continue to be investigated, especially in relation to digital releases intended for educational gaming purposes.

Times have, of course, changed and what was once a luxury is now commonplace. The average house has at least two TVs, and mobile phones, computers, laptops have the same status as food and water. That is, the world has reached a technological level that without them you simply cannot function normally, at least not if you do not want to escape to the forest and live like a protohuman. Like everything else, gaming experiences can be both useful and harmful at the same time, all depending on how and how much they are used. Everything can be harmful if you overdo it, even what is considered healthy in its primary use.

However, if you use its potential in the right way, your possibilities are limitless. Video games are among the activities that can be both positive and negative, but it is up to you which side you choose. Moderation and self-control are the keys to everything, and if you see them as a means to mental progress, make sure it is. Don’t be dependent on them and try to work in your favor.

The largest living creature on this planet is a mushroom, and scientists are seeking to understand why

Bringing science closer to the movie

Sciences. – Recording simulations of the formation of large-scale cosmic structures

The largest living creature on this planet is a mushroom, and scientists are seeking to understand why

GJ 367 b, an exoplanet that is rocky and small, but as dense and heavy as iron