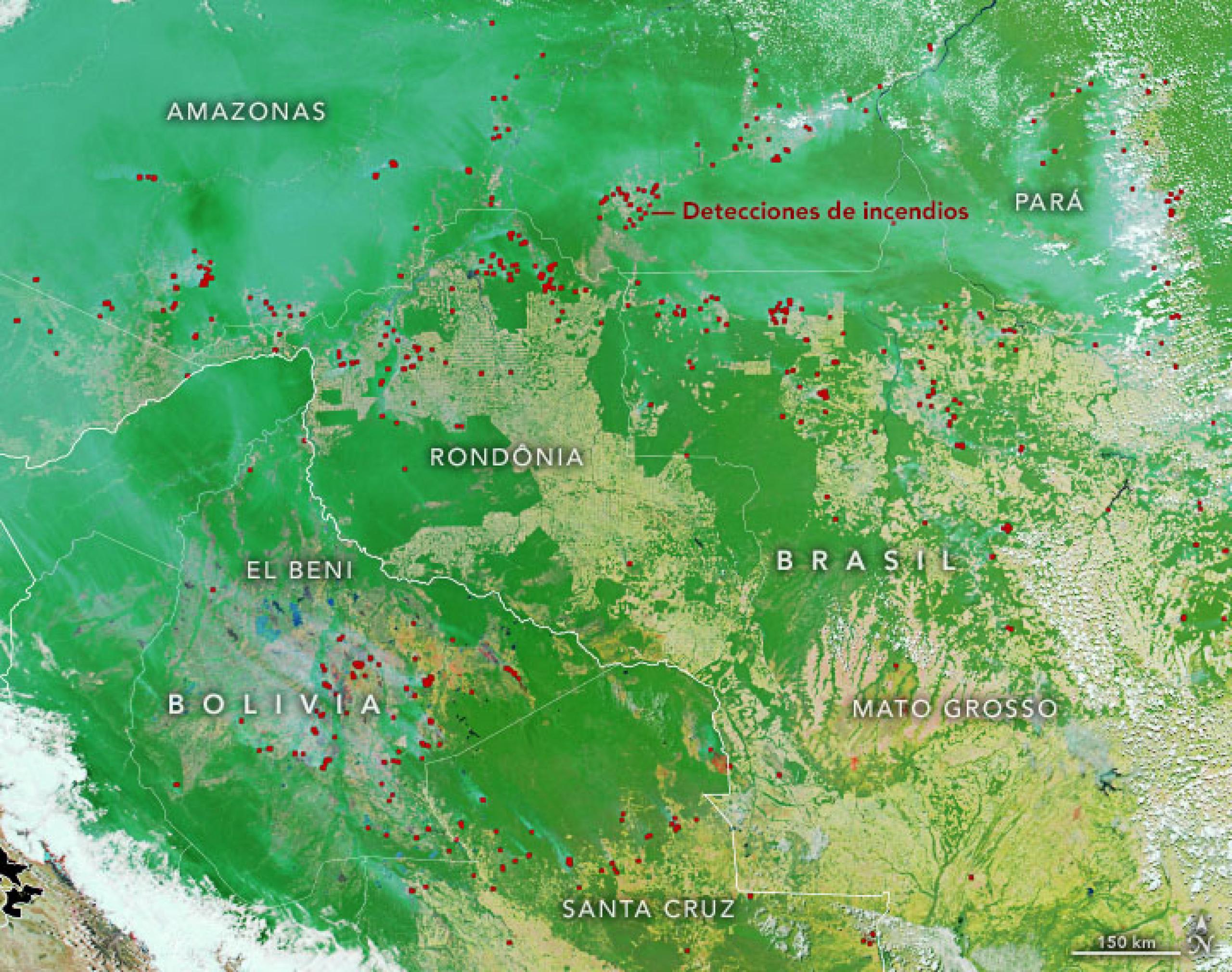 Without human intervention, most of the forests in the Amazon River Basin are too wet to burn. However, during the time that scientists monitored the area via satellite, a great deal of fire activity was detected, especially during the drier months of the year. This pattern has continued this year, with unusually thick plumes of smoke rising from fires near settlements and highways in the southern Amazon.

On September 5, 2022, the Moderate Resolution Imaging Spectroradiometer (MODIS) aboard NASA’s Aqua satellite acquired a normal color image (top) showing smoke over parts of Bolivia and Brazil. Thick smoke billowed from Bolivia’s El Beni and Santa Cruz regions, where forests typically receive less rain than other parts of the Amazon basin. The smoke drifted north and mixed with plumes of fires burning in the rainforests of several Brazilian states, including Acre, Amazonas, Rondônia, Para and Mato Grosso. Intense fire activity occurred in 2022 along major highways, notably the BR-163 and the Trans-Amazon Highway in Pará and Amazonas (upper right in the image).

Thick plumes of smoke in dense forest areas (in green) are usually from fires caused by deforestation. These burns usually occur to get rid of the remaining piles of wood, sometimes several months after deforestation. Logging for livestock and agriculture is common in both countries. Smaller smoke plumes in cleared agricultural areas (in brown) are usually grass fires burned by ranchers and farmers to manage livestock pastures or farmland.

Sometimes, deforestation and human-caused lawn fires get out of control and spread with no way to stop them. In the humid regions of the Amazon, generally in the western and northern parts of the basin, this can lead to fires that devour the substrate and spread along the forest floor. In drier areas, including the Chiquitano, Beni savannah, and Chaco forests in Bolivia, fires tend to spread faster, burn more intensely and produce more smoke, and can devour the forest canopy.

The second image above shows the same region using shortwave infrared (SWIR) light observations from the MODIS instrument. On that map, each red dot represents a “fire detection” that was spotted by MODIS on September 5, 2022. Fire detection is a pixel where the sensor and algorithm detect thermal anomalies that indicate fire activity. A fire during a satellite transit. One fire can lead to many fire detections. (Note: MODIS on board the Aqua does not detect all fires. It may miss some small fires or those that burn under the tree canopy. MODIS on Aqua detects a fire that occurs in the afternoon and does not catch fires that occur in the afternoon.) morning, evening or overnight).

The National Institute for Space Research (INPE) in Brazil uses MODIS observations to monitor daily fire activity in the Amazon region. INPE scientists also maintain a record of MODIS fire detections that spans decades. This agency reported that 226,677 MODIS fires were detected in Aqua in the Amazon Basin countries between January 1 and September 12, 2022. Argentina, Bolivia, Colombia, Paraguay and Venezuela recorded more than 10,000 fire detections. Brazil had 117,436.

The number of fires in Brazil in 2022 is the highest since 2010, when the INPE monitoring system reported 182,168 fire detections as of September 12. From 2002 to 2006, dry weather conditions and widespread deforestation led to particularly intense burning, with 127,000 to 189,000 fires detected in Brazil each year between January 1 and September 12, according to data from the National Institute for Environmental Research.

“We’ve seen a lot of fire activity in recent weeks, but we still don’t know how the 2022 season will compare to other years,” said Alberto Setzer, a senior scientist at INPE. “Fire season in the southern Amazon does not usually subside until October or November. But we are already seeing a familiar pattern: a large number of fires are occurring in the same areas where satellites have identified deforestation in recent years.”

Read this story in Spanish over here.

A passion for medicine leads the Puebla paramedic to help others

“Science cannot do everything on its own.”