Mexico, BC December 28, 2022. – The Baja California Department of Labor and Welfare reiterated its commitment to help federal STPS and the Mexican Institute of Social Security (IMSS) fulfill this provision of increased leave for state workers.

“It is a great progress that is happening in the federal administration of President Andrés Manuel López Obrador. In the government of Marina del Pilar Avila Olmeda, we consider it a real act of justice for the working class in Baja California because it guarantees their human right to rest and vacations so that a person can live in economic security and, therefore, in luxury and peace of mind for themselves and their families,” said the STPS President, Alejandro Arregui Ibarra.

The state official said that until before this decree, Mexico was one of the countries that offered the fewest rest daysSince they enjoyed 6 days of vacation the first year in a new job, we put that number on par with other countries. Such as China, Uganda, the Philippines, Malaysia and Thailand.

Mexico was the last country in terms of vacations in countries belonging to Organization for Economic Co-operation and Development (OECD), The country that gave the least number of days off was in the Organization for Economic Co-operation and Development, It is a great achievement for the working class, and we shall remain vigil to see it accomplished.Arregui Ibarra said.

The Government of Mexico has confirmed that the decree signed by President López Obrador, already published in the Official Journal of the Federation (DOF), will enter into force in the first minutes of January 1, 2023. And in the case of workers who have already worked for five years at the same company, they will now be able to enjoy the benefit of 12 days of vacation, plus two additional days for each of the five years of work.

“This was a pending problem, and today we must give priority to the welfare of workers, and decent rest and vacations will bring more motivated workers.”Mexico, where their emotional well-being is privileged and with an increase in the minimum wage, Mexico is heading in a direction in favor of the working class of the country, under the leadership of the President of Mexico and our Governor Marina del Pilar Avila Olmeda,” he said. 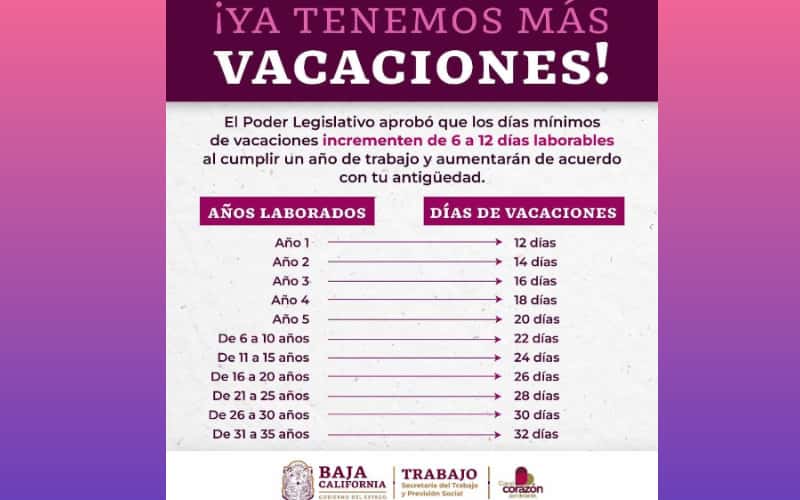 The Minister of Labor eventually clarified that with the reform, workers would get 12 days off after completing one year of workwhich will come into effect from 2023; Starting from the second year of employment, vacations will increase by 2 days per year until it reaches 20, then increased by 2 days off every 5 years of employment, until it reaches 32 days with a maximum of 2 days vacation.