US President Joe Biden said Friday that his country and Japan will face “challenges” posed by China together.

Biden said in a joint press conference with Japanese Prime Minister Yoshihide: “We are committed to working together to meet the challenges posed by China on issues such as the East China Sea, the South China Sea and North Korea.” Welcoming foreign dignitaries to the White House.

For his part, Suga stressed that the two countries would oppose “any attempt” by Beijing to “change the status quo by force or intimidation in the East China Sea and the south.”

The Japanese prime minister also reiterated that the security treaty between the United States and Japan frames the Senkaku Archipelago, an area China calls the Diaoyu and where there is increased activity from Beijing. 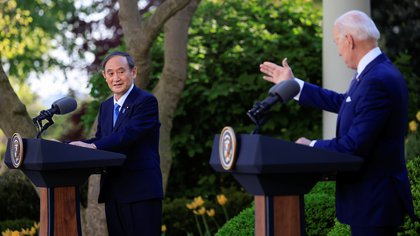 on the other side, Suga also warned on Friday that his country would do its utmost to contain infection with the Coronavirus and organize a “safe” Olympics this year.

Japan is listening and learning from WHO and experts, Suga said. He emphasized: “They are doing everything in their power to contain the infection and implement safe games from a scientific and objective perspective.”

“I expressed my determination to host the Tokyo Olympic and Paralympic Games as a symbol of global unity this summer, and President Biden once again expressed his support.”The Prime Minister added.

After being postponed for a year due to the coronavirus pandemic, the Tokyo Games are supposed to open in July. However, uncertainty about its usefulness has increased due to the growing attack of the virus worldwide.

Sports competition organizers said Friday that they are postponing another stage of the Japanese Olympic torch relay, the third one affected by a surge in injuries, and that the BMX Freestyle test event scheduled for April 24-25 will also be postponed.