The United States does not have it Plans “at the moment” to shoot down the Chinese Long March 5B missile, US Defense Secretary Lloyd Austin said he is traveling uncontrollably at a speed of 28,000 kilometers per hour and is expected to enter the atmosphere on Saturday night through Sunday.

At the moment, we have no plans to shoot down the missile. Hopefully, it affects a place where no one is harmed, like the ocean or some other similar place.The chief of the Pentagon said at a press conference.

The latest forecast is that the missile will enter the atmosphere at 23:59 GMT on Saturday with a margin of error of plus or minus 7 hours and 45 minutes, although more accurate estimates can only be made a few hours before re-entry. ..

When asked whether the United States has the technical ability to shoot down the missile if necessary, Austin replied that they had the ability to “do a lot of things,” but insisted that there were no plans for the missile at this time. Launch of an ICBM, similar to that used by the GMD system (archive)

Although Austin didn’t go into details, The United States currently has an ICBD, Which is very similar to space missiles, such as the Long March 5B, in terms of capabilities and technology. Around GMD (Midfield Defense), Created by Boeing Airlines.

GMD is complicated and expensive Ballistic missiles are designed to intercept other ballistic missiles while they are still in space, that is, halfway between their launch bases and their target. The United States currently has 44 launch pads available in Alaska and California, and a large number of radars and command and control stations to direct operations, according to public information provided by Boeing.

However, successfully intercepting a missile traveling at about 17,000 miles per hour with a projectile traveling at a comparable speed is not easy. The success rate from the currently implemented tests is 56%, although it is believed that firing at least four interceptor missiles at the same time may rise to 97%, according to what the magazine reported. The Economist. 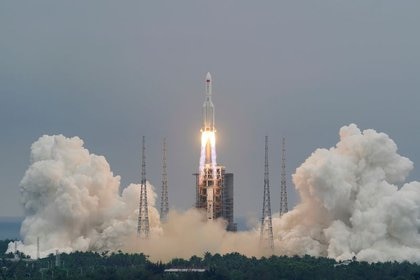 During the press conference, the US Secretary of Defense also fired A veiled criticism of China, stating that those working in space have a duty to do so “in a safe and thoughtful manner.”

The mass of Long March 5B, which China used last week to launch one of its future space station units into space, has a mass of between 17 and 21 tons and a volume of about 30 meters, making it one of the largest pieces of debris to return to the atmosphere.

According to the latest expectations, The missile debris that could fall to the ground would do so sometime between the 41 North and South parallels, Most likely in the Atlantic Ocean, followed by the Pacific and Indian Oceans.

With information from EFE