Almost every building in the sprawling Azovstal steel mill, the last stronghold of the Ukrainian resistance in Mariupol, was destroyed by brutal Russian bombing.as revealed by impressive new satellite images from Maxar Technologies.

The first photo shows the general view of the plant, the second photo is a little closer, and the third is a closer view of part of the site. Destruction was seen in all of them. 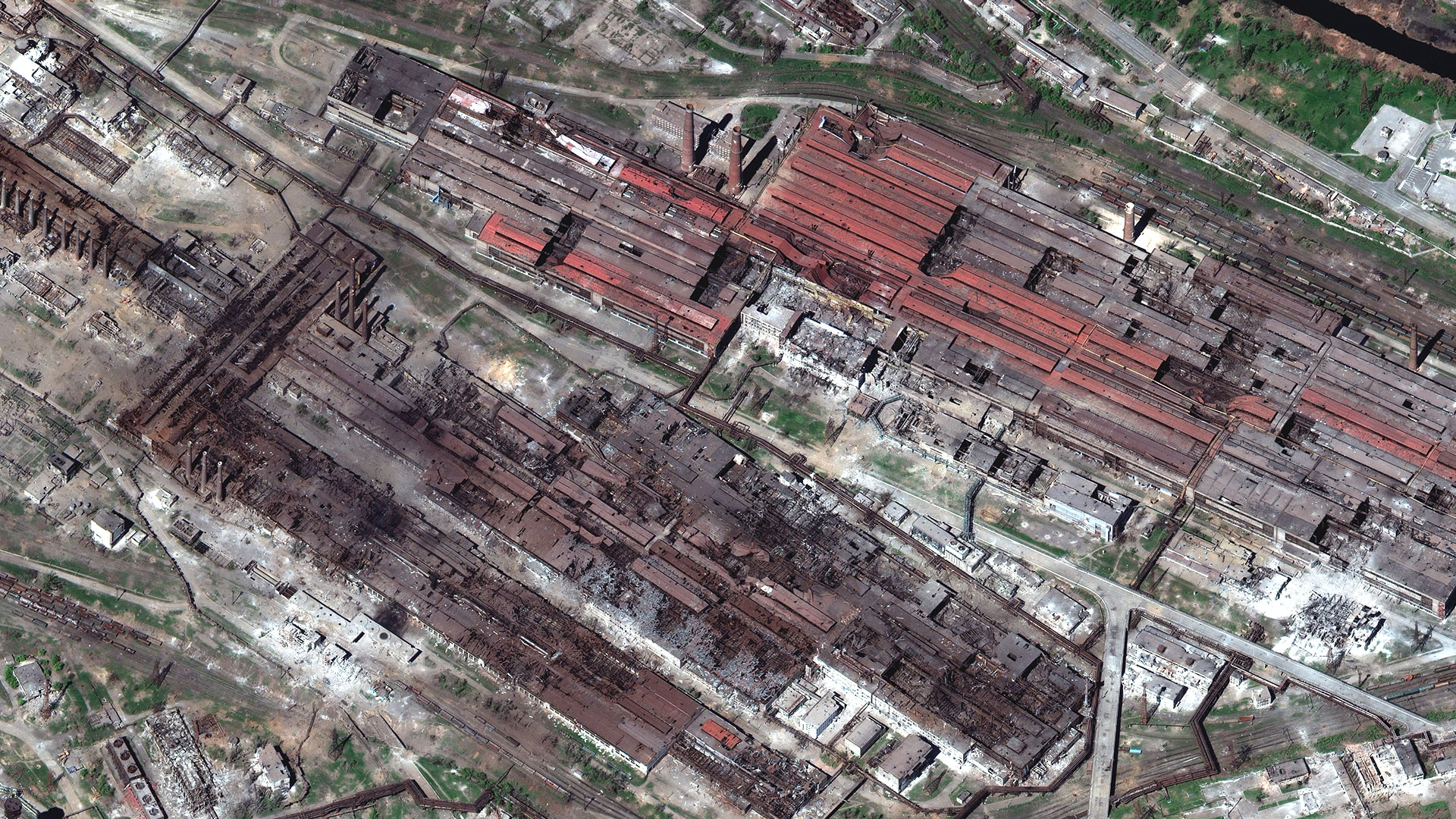 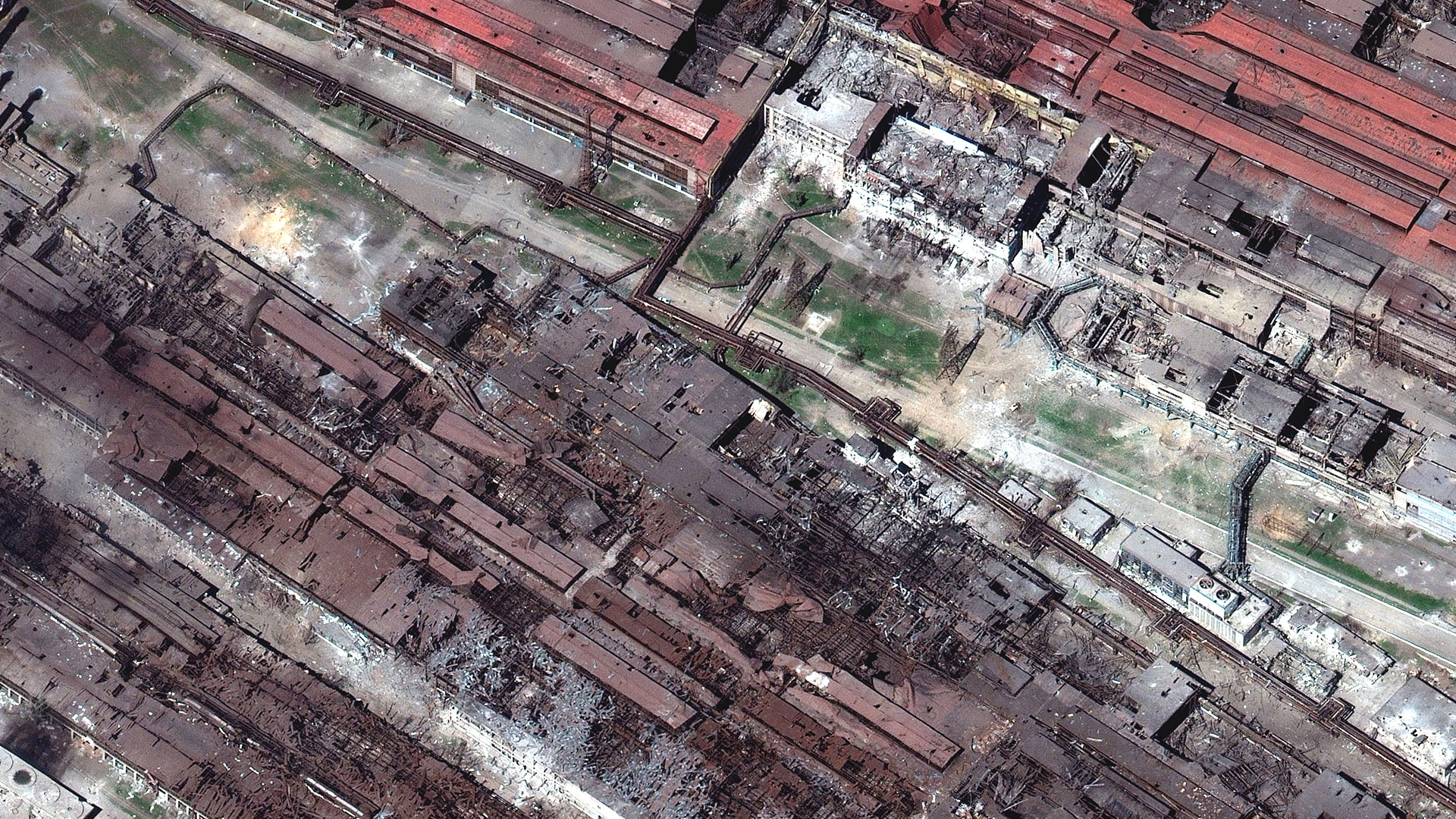 Some of the buildings have large holes in their roofs and others have been reduced to rubble. Many residential and government buildings east of the factory were completely destroyed.

Ukrainian forces and hundreds of civilians still resisting took refuge in the deep basements of the steel plant.

Svyatoslav Palamar, commander of the Azov regiment at the plant, told CNN that the plant was heavily bombed by artillery, ships and air strikes. “There are basements and bunkers that we can’t access because they are under the rubble,” Palamar said. We don’t know if the people there are alive or not. There are children between the ages of four months and 16 years. But there are people who are trapped in unreachable places.”

thing is Russia has rejected all proposals to evacuate Ukrainian soldiers and civilians still trapped in the port city of Mariupol, An adviser to the Ukrainian president, Volodymyr Zelensky, said on Saturday.

Miguel Podolak announced that at the request of the president, several “world leaders” contacted the Kremlin with a request to create a humanitarian corridor from Mariupol, where the fighting is still going on near the Azovstal steel plant. “Unfortunately, there is no response from the Russian side,” Podolyak said in an interview with Radio Europe LibyaRe who I thought it was Moscow pursues the “symbolic” goal of destroying the city, which is mostly controlled by the Russian army, and those who defend it, referring to the Azov Regiment.

“Every day there are attacks with heavy artillery and fighters to destroy Azovstal. The Russians know that there are children inside, but they continue to bombard.

Moscow ruled out the possibility of an attack on the steel plant to avoid Russian losses, opting instead to besiege the plant and prevent humanitarian aid from reaching the besieged.

Last Thursday, the UN Secretary-General, Antonio Guterres, stated at a press conference with the Ukrainian president in Kyiv that the UN was doing “everything it could” to evacuate civilians from the station. For his part, Zelensky stressed that Ukraine is “open to conducting immediate negotiations” to achieve a humanitarian corridor that would allow the rescue of those who remained in Azovstal.

In the port, most of the administrative buildings in the area were badly damaged and their facades were sunk or blackened by fire.

Life seems to have stopped there all of a sudden.

Infobae in Ukraine: Russian forces advance on Zaporizhia, a peaceful city that promises fierce resistance to the enemy
Angelina Jolie’s surprise visit to Lviv amid Russia’s invasion of Ukraine
The Three Scenarios of the Russian Offensive in Donbass and the Resistance of the Ukrainians