Skip to content
Manuel Aspilquita in the United States.

Despite the obstacles faced by the epidemic, Manuel Aspelqueta Ascencios, Graduated from the Faculty of Civil Engineering of the National University of Engineering (UNI)was able to recover from COVID-19 and reached first place in the Bicentennial Grant Competition of the National Scholarship and Educational Credit Program (Pronabec) of the Ministry of Education.

After two years of hard effort, the young UNI engineer was given the opportunity to take his postgraduate studies abroad. He managed to get four prestigious universities in the United States to accept them to study for a master’s degree.

“After overcoming the infection, I began to believe that God had a mission for me,” said Manuel, who achieved an outstanding score of 113, making him the winner of a government-funded postgraduate scholarship competition.

“I didn’t think I would get such a high score. There were many factors that favored me, such as my academic profile, bachelor’s thesis, and partial funding from other scholarships to study my chosen program,” the UNI graduate explained.

Thus, Pronabec will cover approximately 35% of the expenses of the Master of Science in Civil Engineering program to be borne by young talents at Purdue University West Lafayette in the United States.

“I applied to three other universities: Texas at Austin, Ohio and Georgia Tech, but I decided to choose Purdue. I got into all of them on the first try,” he said proudly from New York City, where he came to train in the IEP before starting his classes. The remainder of the cost of your major will be assumed by Fulbright and Purdue.

As part of the master’s degree, Aspilcueta will conduct research on the use of plastics in the construction of buildings and sidewalks in order to reduce the impact of climate change.

“I want to use these plastics as a building material and to improve the properties of concrete,” said the scholarship recipient, who revealed that he had prepared himself since he was 13 to enter UNI, seeking to contribute to the development of social housing that has an earthquake-resistant and environmentally friendly structure. 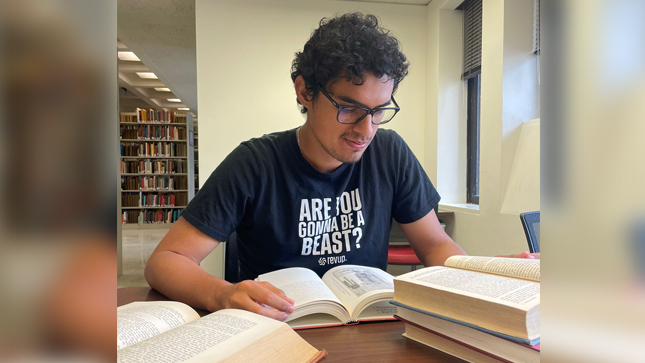 Manuel Aspilquetta studies in a library.

His father Uriel, who also studied at UNI, discovered Manuel’s true profession. Note that his son, from a young age, showed interest in drawings, figures and construction.

“I haven’t decided yet. I didn’t know whether to choose architecture or civil engineering. I had a conversation with my father. I told him I was surprised to see how something drawn on paper had become a reality. It was beautiful to me. Without thinking about it, he told me : “My favorite thing is civil engineering. This was my guide.”

Manu, as they affectionately call him, has already stood out from the school for his good grades. At home, they still keep some of their cardboard certificates and medals.

In his third year of high school, Manuel began his preparation for UNI in parallel with his school classes. After three years of effort, commitment and dedication, he secured the long-awaited position on his first attempt, to the pride of his family. “My father helped me a lot. He taught and guided me to pass the entrance exam successfully,” added the son of Arequipino and Barrankina. 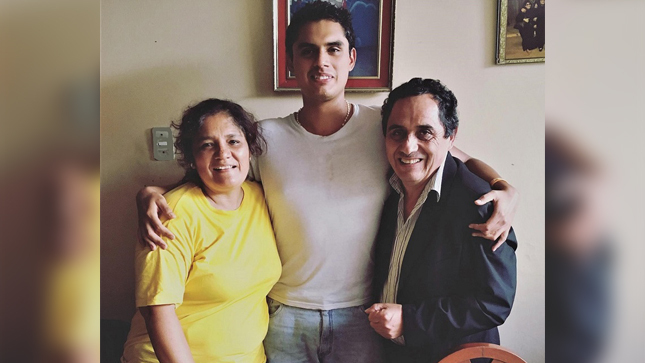 Manuel Aspilquetta and his parents.

In the university classrooms he was also distinguished by his high academic performance. He graduated second in his class. He even had the opportunity to travel to Colombia to participate in a research conference. In addition, as part of his work in public administration, he was hired by the institution where he worked to travel to China and Chile, where he exchanged experiences with professionals from his career.

Already on American soil, the young talent is now looking forward to the beginning of a master’s degree. On his return, he seeks to apply his research in Peru and venture into teaching, as his mother Guadalupe, an elementary school teacher, or his father Uriel, who studied electrical engineering, but works as a teacher. Among its other goals is to create a startup with a circular economy approach.

He advises young people who, like him, want to pursue a master’s or doctoral degree at a major university abroad: “Never give up on your dream of further study. I know many colleagues with great potential who have not yet left their comfort zone. Comfort zone is a beautiful place. , but nothing grows there. “We have to try, and more so in these times of pandemic,” said Shalako, a lover of healthy living and sports. Although his way back is still a long way off, his family has already planned to welcome Him with a succulent northern seabee and golden malaya, his favorite dishes.

Cristian Alcaraz, Aporeminio who at the age of 25 became an official in the British Red Cross office: ‘I want to motivate other young people’
A 16-year-old Peruvian teenager entered ten major international universities
Aracely Quispe’s dreams and work at NASA and women’s empowerment and projects