Skip to content
An avatar of Campazzo during his first matches in the NBA (Photo: AFP)

RC Buford appeared in person against Julio Lamas after a match for the U-22 team at the World Cup in Melbourne. It was August 1997 and Emmanuel Ginobili He was hardly an uncut gem of the Estudiantes de Bahía Blanca, but he was the director of exploration at the time. San Antonio Tottenham He had a clinical eye. Officially, the NBA is starting to follow closely Manu, Which will move to the Texas franchise only by the end of 2003. The case captures the precision machines behind the scenes in the largest basketball league on the planet and understands the hard work behind it. Denver Nuggets Before employment Facundo Campazzo.

“We always say that exploration is a selection process. Every year, we operate with a mindset: the short term for the next draft and the long term for the next three years. My list for draft includes 100-120 names, while for the free agency we start with 50-60 players to checkHe said before Infobae Rafal Jock, an international scout who has worked for Nuggets since 2013 and is responsible for identifying the best talent outside of the US for both recruiting and free agency.

Jock started working at Eurohopes, one of the companies responsible for researching various franchises and who has trained the many professionals who today work within NBA squad structures. After being an employee of the Polish Basketball Association, he arrived in Denver and was one of the main people who landed Campazzo there. The other? Martinas PossiusA former Lithuanian player turned scout, Faco met in Murcia during his last year as a professional.

“Martynas played a major role in the exploration and employment process at Facu. It was a huge advantage for our organization because they played together in Murcia and developed a relationship and trust between them. Martynas was able to give our show, but also explain to Facu our culture, how good the coaching staff is, etc.. Faco also felt more comfortable having someone like Martinas helping him move to a new club and city, “according to Joc’s details.” I met him when I went to Murcia (2016/2017). When I saw him in those early days, his talent really popped up. He was very influential and consistent every day in training.It is recommended to report it in advance Infobae.

Rafal confirms it was “It is only a matter of time before Campazzo finds himself in the NBA.” He puts his gaze on the main points: “It was not difficult to track him down because he played for the best club outside the NBA and also made a real name for himself competing with Argentina in major international events such as the Olympics and the World Cup.”

Another scout who played a major role in Campazzo’s arrival explains why he chose to recommend him: “Because I played with him and trained with him daily throughout the season. I saw and knew what I could do. After I started working in the NBA and following it closely, I realized I could be successful at this level.“.

Their words reveal the moment Facu explodes. The beginning of the upward curve. At Rio de Janeiro 2016, he averaged 15.8 points per game and 5.8 assists in about 28 minutes per presentation for the team that left in the quarter-finals after losing to the United States. Meanwhile, he played a leading role in Murcia in Spain after being loaned by Real Madrid. The World Cup 2019 was its climax with the Argentine national team, and the final landing of the elite: He averaged 13.3 points, 7.8 assists and 4.3 rebounds in 29 minutes Within this team he was the runner-up. In unison, he was on his way to bid farewell Merengue As one of the best players in the world and has 10 titles.

“My role was to update the rest of the group with Facundo’s current form, gather information about him off the field and also be able to find out the details of his Real Madrid contract. It was my turn to scout reporting and convince the rest of the group of Facu’s abilities and drop him into the NBA.“Jock explains.”We were close to signing it in the summer of 2019, but that didn’t happen. I’m glad we finally managed to get him signed. The personal relationship helped, but basically it was up to Facu to make the decision. He wanted to be in a winning organization that had a chance to compete for a championship and that was the main reason he signed with Denver.Gravel, rubble. 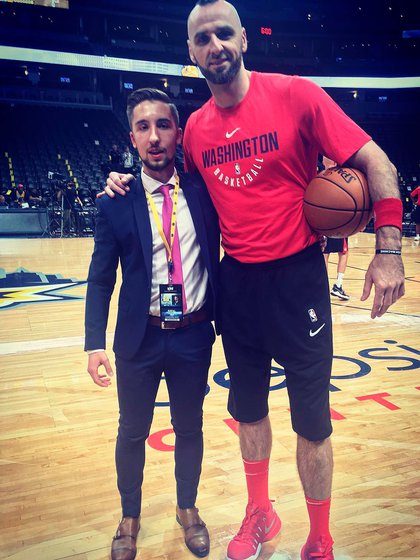 Jock admits Campazzo had it “Many offers” from the NBA, But there was a major point that prompted him to choose the franchise that reached the final stage in the Western Conference and fell into the hands of the Los Angeles Lakers in that case: “From the first conversation, Faco explained how important the victory was to him. He gave up better financial opportunities and in terms of playing time to join a team with real qualifying opportunities, which is very clear what kind of person and competitor Facu. ”

So far, average Campazzo 16.3 minutes In court with 5.5 points and 2.1 assists In 30 matches, a team provided foul passes but finished sixth in the Western Conference with 21 wins and 15 defeats. “ What Facu brings to the team is very difficult to quantify and quantify, That’s why so many people in the United States questioned his prospects and chances of participating in the NBA. Its engine and energy saving capacity is unique. He’s taken our locker room by storm, and people are naturally drawn to him because he’s such an amazing guy, selfless, and he does whatever it takes to win.. His vision of pass and pitch is clearly two key traits of basketball that set him apart too, ” analyzes Jock, who has also been a staple in other Denver appointments such as superstar Nikola Jockic, Juancho Hernángoemez (today in Minnesota), Yusef Nurkic (today in Portland) or Joffrey. Lauvergne (today in Lithuanian basketball).

“Eat, sleep, breathe, and think about basketball!”Praise Jock. “He just wanted this shift to the US to be as easy as possible for his family, so he asked Martinas and the other club staff about the city, NBA details, various travel procedures, etc. Not a typical beginner. His curiosity to learn gave him an advantage because even before the first training session he knew everything about how we played, our coach and his new teammates., Etc., “he identifies him.” The first few days for him and his family were comfortable adjusting in Denver. Simple things, from finding a home to live in, to getting a car, going to the gym, etc., “admits Martynas.

Martynas Pocius with Facundo Campazzo in Murcia: putting together plays between the two shared by the same player

Pocius is 34 years old and has a past as a goalkeeper in various teams, but his start is at the famous Duke University in the USA. He became a regular player in Lithuanian basketball with Zalgiris Kaunas, but he also played for Real Madrid and Galatasaray. It was his last year in Murcia, the season that in the future would open the doors of the most important league on the planet for Campazzo:I’m glad it didn’t take long to adjust to the NBA game and the NBA locker room. Coaches and colleagues love him because he’s such a great guy. It also highlights their motivation and defense. Although he is a younger player, he makes up for it with his passion and toughness. “

The Argentine is adapting to the NBA “faster than most rookies” and has his own style of grabbing the crowd’s attention, as the Lithuanian analyzed: “He plays a style of basketball that is fun to watch and the fans love his exciting game.”. Facu had already become an internet sensation in the US. Not many fans and journalists in the US were aware of his playing style. What’s more, All Nuggets players love to play with Facu because you can be sure that if you are open he will pass the ball to you. Many players say Facu plays like a miniature Jokic, ”Raval adds.

Campazzo helped the Denver win over the Lakers, which spread very quickly

An ever-recurring topic about the Argentine goalkeeper’s career is linked with a height of 1.80: today he is one of the shortest players in the NBA. “We don’t worry about that. Because, As we say in scouts, we measure players by their heart, not their height. And Fakio for his energy, his physical quality and his motor, he has a game much bigger than his height. The transition to basketball in the NBA is clearly never easy, but so far everything is going well. The most important thing in the NBA is always being prepared. Coaches always tell players: Don’t go too high, never go low. There are games almost every day so your chance will come. It’s a different reality for Faccio because at Real Madrid he always had the ball in his hand in the last quarter, but it was great for us, “Jock analyzes.

He adds an unknown aspect of his progress: “He is getting better from game to game. What really surprised me was how good I became a shooter. In our dressing room we have tables for best practice shootings, and the Facu is near the top. It shows you that he’s constantly working on his game and wants to do whatever it takes for his team. ”For his part, Pocius made an honest analysis about the possibility that Facu could play a leading role in the NBA as he did at the time in Spain. It is difficult for him to be a regular player due to the intense competition in the position, yet he put forward a hypothesis about the essential role he could play: “He can find a very important role in any NBA team in which he can contribute to every match. Men like Raul Neto (Washington Wizards) and JJ Barry (Dallas Mavericks), Patti Mills (San Antonio Spurs) and Ricky Rubio (Minnesota Timberwolves) found these roles and thrived in them.. Facu has the opportunity to do the same. “

Campazzo receives praise from his coach Michael Malone, but he is also a favorite on the club’s social networks due to his large number of interactions. “Of course! I really feel like we’ve become the team that all of Argentina support! You can see it in the interactions of Argentine fans on social networks. Even I myself got a lot of new fans from Argentina. Our press conferences, now completely virtual with Zoom, have many journalists from Argentina. Facu is very proud of the place he belongs and is a great ambassador for Argentina around the worldJock admits that he chose the Argentinian’s match against the Los Angeles Lakers as his best match in Denver so far.

The Campazzo phenomenon: a comparison with Ginobili, why he is a “people’s player”, like Tevez, and his competitive entity that captivates
The dream he pursues, his unknown friend in the locker room in Denver, Ginobili’s advice and his wife’s role in making the NBA: Campazzo’s confessions
My History: Facundo Campazzo was chosen for the NBA All Star junior game

The best meteor showers of the century could happen later this month. Here’s what you need to know – teach me about science