The extraordinary fact of being able to take the best images of radiation The moon from the cell phone, Make anyone think, because it is hard to believe; However, it is possible, and prof Lovers of astrophotography He succeeded and shared a few steps with anyone to do that.

The Astronomer Antonio MorenoA lover of science and photography, he made a series of recommendations through his Twitter account, to be able to capture the majestic satellite of the Earth with the help of mobile.

Researcher with studies in MadridHe also uploaded a picture accompanied by the phrase: Do you want to take a picture like this on your mobile phone? I will tell you the details on this topic and how to obtain it. “

The good news is that in addition to that, to capture the best moments of the wonderful satellite, you do not need to own a mobile phone of the last generation.

How do you get a picture of the moon?

* The first step is to search for a telescope, because this optical instrument is required to be able to observe in detail.

* According to the scientist, the image that comes out from the eyepiece telescope Via mobile phone. To do this, you will have to purchase an adapter that will fit perfectly between both bodies.

The astronomer asks for a mobile phone adaptation. (Photo: ANTONIO_MORENO)

Once the phone is adapted to the telescope, tests can be started from different angles and at different magnifications. Main The recommendation is that for planetary photography, you should look for cameras with very small pixels.

* For the first images, the auto focus mode can be used well by the cell phone screen which will act as the screen.

Antonio emphasized that for planetary photography, cameras with very small pixels should be sought. (Photo: ANTONIO_MORENO)

For those who want a video, Antonio Moreno explained that the clip can also be accessed with an automated telescope.

After that, the video must be passed to a file Free program Which can be found on the internet called “PIPP”, which will be responsible for standardizing the formats and allowing some initial adjustments.

Then, the video images will be transferred to a stacking program such as “Registax” or “Astrosurface”. 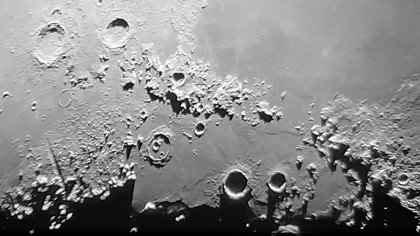 On the other hand, a few days ago, an extraordinary astronomical event called a “worm moon” was visualized, meaning the first moon to appear after the vernal equinox, in addition to the beginning of Christianity on Easter.

The National Autonomous University of Mexico (UNAM) clarified that “Worm MoonIt cannot be considered a ‘giant’, as it is not close enough to Earth despite being the fourth brightest this year.

And that is that the giant moon is the full moon near its perigee, which is the closest point to the Earth in its monthly orbit. ”That is, when our planet and the satellite are close to each other, in addition to that it coincides with the moon in a complete phase.

This phenomenon is also called “the whole month of March”. While the nickname the worm arises because it is the time when the earth melts and these animals appear. Another weird fact is that the Native Americans called it Raven Moon, because it coincided with the moment when these birds say goodbye to winter and welcome the heat with their crowing.

What is a worm moon and when to see it from Mexico
What day does DST 2021 start in Mexico?
Horrific images from Mexico of the worm moon, the last celestial sight of March

Free: Xbox gives money to its fans to buy games or DLC