On Sunday, April 11th, many netizens shared videos of seeing “strange lights” in the sky, recording and sharing them to find out if a plane is on fire.Yes, however it became known that It was a natural phenomenon and it was the asteroid 2021 GW4.

This phenomenon was mainly seen in Cancun, Quintana Roo, but users from other entities said they saw it as well.

The authorities did not provide any explanation for the phenomenon, but the trend of “meteor in Cancun” escalated on social networking sites, as Internet users exchanged their videos and theories, and there were even those who referred to them as foreign bodies.

A meteor lit up the Florida sky

As seen in Florida

Residents of South Florida in the United States baffled on Monday, When an asteroid flew in the sky suddenly into a ball of fire and lit up the night. This phenomenon occurred around 10:15 pm.

“Did you see a meteor tonight? We’ve got some reports about one that can be seen from Southwest Florida“The National Weather Service reported in the Tampa Bay Area on its Twitter account and the post accompanied a satellite image of the event.

On social media, residents of the state’s Atlantic coast, From West Palm Beach to South Miami, They shared videos on Twitter of the amazing scene.

Security footage and video footage showed a dark night still suddenly lit by what appeared to be a large fireball crossing diagonally across the sky. Within a few seconds, it’s over.

According to NASA, an asteroid is a small rocky object orbiting the sun. A meteor is what happens when a meteor, which is a small fraction of an asteroid or comet, burns up as it enters Earth’s atmosphere. Create a ray of light in the sky.

There is disagreement over whether the asteroid seen Monday night corresponds to 2021 GW4, which was expected to clear Earth’s surface on the same day. 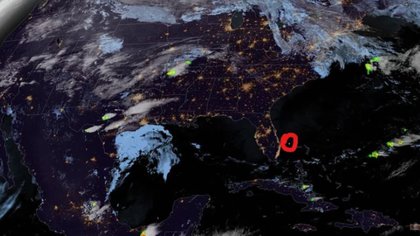 According to meteorologists CBS12 NewsAnd the Zak Coffey The asteroid has been programmed to makeA very close approximation“From a distance of only 16,000 miles from the ground.” EarthSky.orgThe asteroid is estimated to travel at 29,706 miles per hour.

Zach Covey wrote on Twitter that if the meteor seen on Monday is indeed 2021 GW4, It may have flown closer to the surface of the Earth than originally expected.

“To put this in perspective, most nearby asteroids are between 1 million and 3 million miles from Earth.“, It is to explain.

However, Jonathan McDowell, an astronomer at the Astrophysical Observatory, shared from his personal Twitter page that the phenomenon was seen in Florida It has nothing to do with GW4.